It’s been a mad month for both of us at Wined Up, with James coming towards the end of his stint at Luckett Vineyards in Nova Scotia and a particularly busy period at Leiths for me. But busy is good when you work in food and drink, and one of the highlights of my year took place last week!

The YBFs (or Young British Foodies awards) were established in 2012 to seek out and celebrate some of the best and freshest talent in the UK food and beverage scene. With categories such as Food Sharing, Front of House, Chefs, Alcohol, Street Food, Meat and even this year’s brilliantly named Charles Tanqueray Inginuity Award; pretty much every nook and cranny of the industry is covered.

This year, Leiths hosted the hotly anticipated Chefs judging round, which saw six brilliant chefs from some of the UK’s most exciting restaurants cook up a plethora of incredible food. On the judging panel were Nuno Mendes (of Chiltern Firehouse), Lisa Markwell (Leiths-trained chef and journalist), James Knappett (of Bubbledogs), James Lowe (of Lyle’s) and Camilla Schneideman (managing director of Leiths) – and they had a tough job.

There wasn’t a weak link in the line up; from Yosma‘s Hus Vedat showcasing Turkish cuisine in a whole new light, to Kricket‘s Will Bowlby transporting us to India with one of the most flavourful dishes I’ve ever tasted (if you see Macher Jhol on the menu, order it). But Alex Harper, of Mayfair’s Neo Bistro, won the round with his elegant menu which culminated in the delivery of a beautifully simple chocolate tart with malt ice cream. 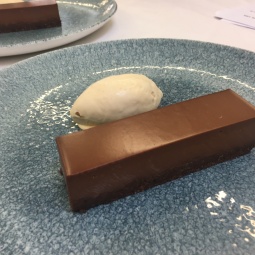 The awards party itself, held at the stunning Two Temple Place, was impressive and celebratory whilst still managing to be down to earth. Every one of the winners (read all about them here) was incredibly deserving and talented, but received their awards with humility and genuine happiness – it was a really lovely atmosphere.

The winner of this year’s Alcohol category was Ruth Spivey, founder of the Wine Car Boot, which we attended on 10th June. During the pop up, which was held near Granary Square in London, we were introduced to a great host of independent wine businesses in a laid back setting; such a clever way of giving people the opportunity to “taste their way out of the supermarket”.

Highlights for us included When in Rome, who are changing the way we think about wine packaging by offering brilliant Italian craft wines in boxes. Their mission statement reads as follows: “When in Rome wants to change the way you enjoy wine. Not only is a wine box better value and much better for the environment, but the vacuum tap means you can enjoy a single glass whenever you want it, without fear of wastage.” Makes sense to us!

Noble Rot, one of our favourite wine mags which now has a hugely celebrated wine bar/restaurant, made an appearance too. I was thrilled to get my hands on one of their ‘Winos with Attitude’ tote bags as well as the current issue, which is now extremely well thumbed.

Amongst the other stands, it was great to see a range of innovative distributors who, in combination, are introducing the UK to some truly exciting wine. Dynamic Vines, who also appeared at the RAW WINE fair earlier in the year, source organic and biodynamic wines that have a real sense of origin: the place, the soil, the people that made them. Swig is another company to look out for; used frequently by The Wine Show’s Amelia Singer, they are constantly on the look out for unique wines from around the world that “punch above the weight”.

You can read all about the other sellers at the Wine Car Boot here. All in all, a fantastic idea, which makes Ruth a very worthy winner of this year’s Alcohol award.

Another victor at this year’s YBFs was Som Saa‘s Christina Schneider, whose cocktail menu at the brilliant Thai restaurant really is transporting and won the Charles Tanqueray Inginuity Award. (If you’ve ever asked me for a restaurant recommendation, chances are I’ve pointed you in the direction of Som Saa – it is excellent on every level.)

These awards, their winners and the ceremony itself are so exciting. It’s a way of championing innovation, as well as really celebrating the hard work of young food and drink professionals and the industry as a whole. Plus, the evening was sponsored by Tanqueray who served GIN RAINDROPS… Come on.

If you can, try to check out the restaurants, events and producers mentioned here. It’s such a great way of being able to learn and experience the best the UK has to offer. We’d love to hear what you think!

One thought on “The YBFs: Shining a spotlight on boozy brilliance”