For those of you who haven’t ever heard of it, the RAW wine fair is a global exhibition, founded by Isabelle Legeron and celebrates natural, biodynamic and low intervention wine making. The fair is an intercontinental success and it is held in London, Berlin, New York and Los Angeles, giving winemakers from all over the world a chance to connect with distributors, restaurateurs, journalists and the oenophiles of the general public. Also, it’s a chance for people like Lily and I to meet up and get tipsy all in the name of ‘work’.

So, this year I had clearly moved up in the world as last year I had to get the Megabus down to London and did an eight hour round trip all in the name of wine, however this year I could afford to bring my girlfriend along AND book the train! So we got up and hopped on the train down to the big smoke to meet Lily, catch up with Isabelle and drink as much natural wine as possible! 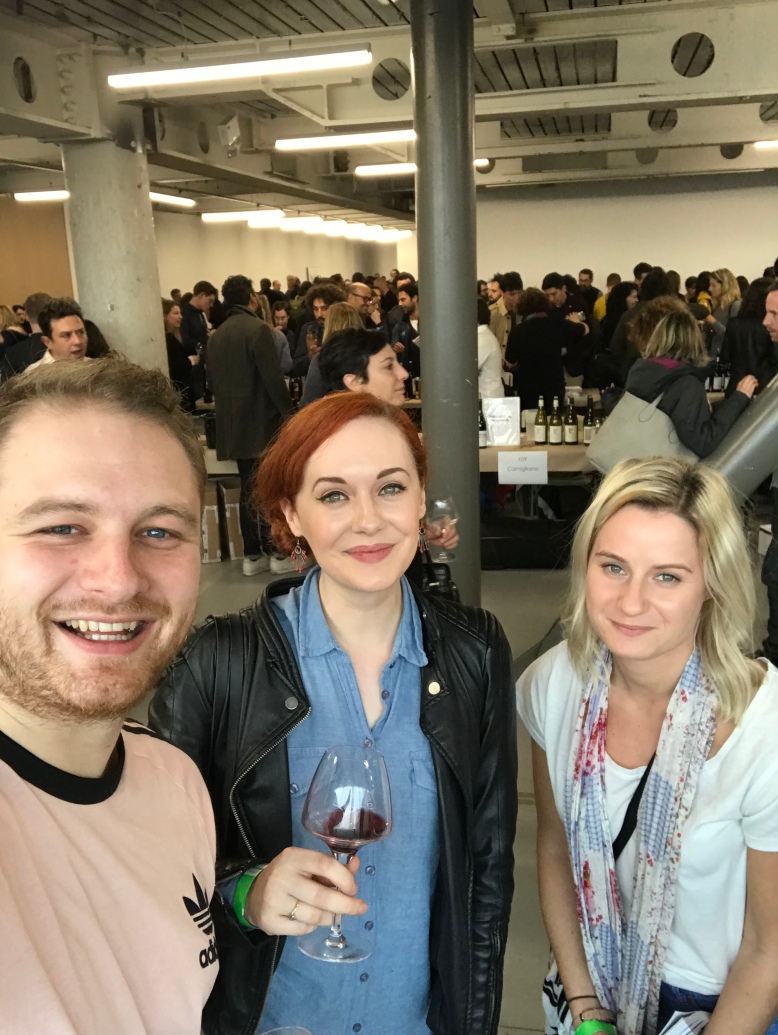 We arrived in London and headed for 180 The Strand (where the fair is held), we showed our tickets, were given our press passes and then entered the wonderful world of RAW Wine and interviewed Isabelle. Here’s how that went.

ISABELLE LEGERON: I know! First time it was London, then New York and now London again. Thanks for coming!

WINED UP: So it’s been a year since we first sat down with you and as you’ll be aware, a lot can happen in a year. For us at Wined Up we have a clearer idea of how we are looking to evolve and have a stronger identity and a certain style but what’s been going on with you?

ISABELLE: So, as you may have seen, we have expanded and put on another fair in Los Angeles so our scene is getting bigger and the growers have definitely come to trust us in what we do and a number of them had come to us and expressed an interest in going over to the west coast. A year ago when we first did New York we had tons of people coming from different states and the west coast in particular so it made a lot of sense to bring it over there. So now we are focusing on cementing our profile and making sure that people know what we are doing and we get the right level of trade to come in order to service our growers.

We have actually revamped our website to make it more interactive and our growers, importers and restaurants all have profiles so you can go on the website and for example if you are looking to drink in London then you can see what’s available to you and where you can get it!

We’ve also launched RAW wine week so we have had tons of events happening in London all around the UK in different bars and wine shops, so you can put the dates and location in to see what’s going on where you are. 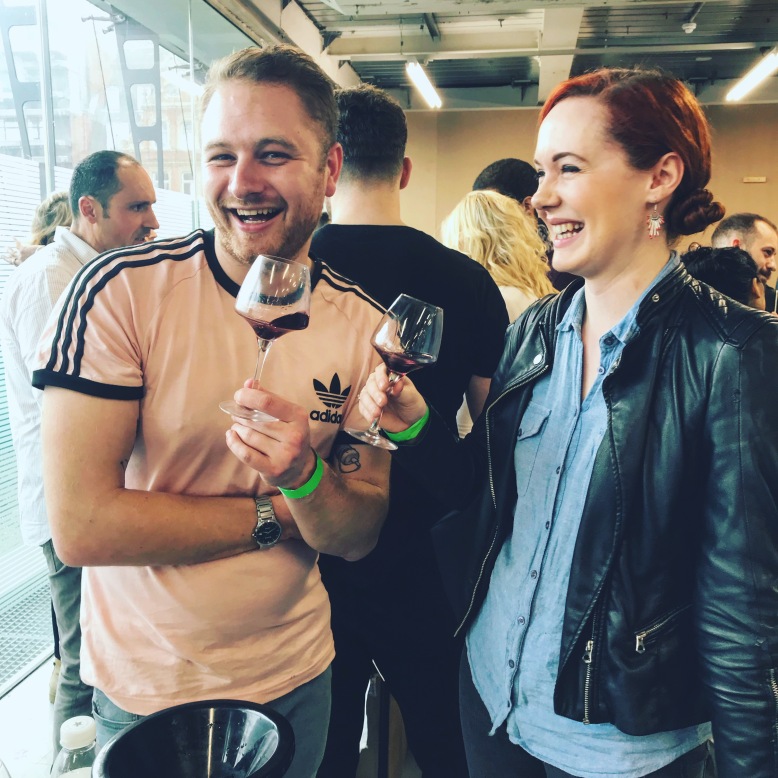 WINED UP: Ah yeah, this is something I have been meaning to bring up with you!

WINED UP: Well, the last time we spoke I mentioned the prospect of RAW Wine Sheffield and you joked and said that it would only be me and my family and friends there.

WINED UP: Well I am happy to say that I am now running Sheffield’s only Sicilian wine bar and just round the corner there is a certain shop called Starmore Boss which just so happens to have participated in RAW wine week!

ISABELLE: Yes they did!

ISABELLE: Yes of course! Sheffield is now on the map which is really exciting because for so long the scene has all been about London so it’s a great thing to see that it’s spreading and it’s better for the growers so it’s just really nice that the people of Sheffield now have the opportunity to drink more natural wine.

WINED UP: Just going back to the whole LA thing. What’s the market like there? I always kind of saw London and New York as both having similar trends, lifestyles and mindsets and then LA being completely different but still the kind of place to definitely embrace the concept of natural and biodynamic wine.

ISABELLE: Well LA is just in the beginning of the scene. It’s nowhere near as big as New York but I think it will explode soon. You’re right when you mention the different lifestyles and trends between the west and east coast. LA is a lot more health focused and how they eat and exercise, but weirdly the jump into the drinking habits hasn’t been made yet but when it does, the scene over there will explode.

WINED UP: So, I was talking to my girlfriend earlier and she has a chemistry background so looks at wine in ways that I don’t necessarily think of as I am a big ‘artsy’ romance person but she proposed a question about the technical side of wine making and we wanted to get your opinion on it. 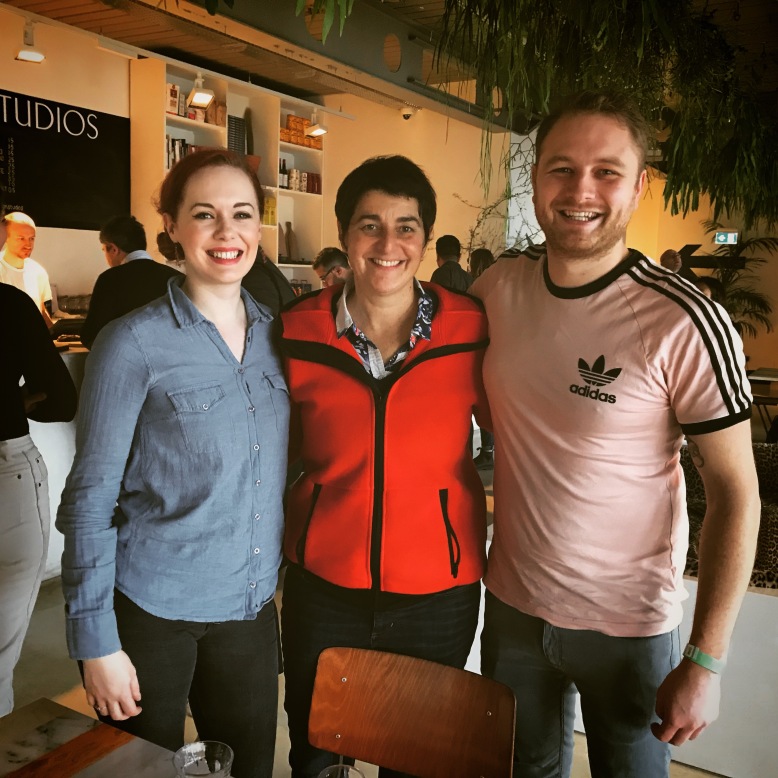 Two bloggers and a master of wine walk into a bar…

WINED UP: You’ve said in the past that natural wine is like going back to basics and in a lot of cases natural wine growers like the Amiel brothers of Domaine des Amiel have torn up pre-existing vines that were used for commercial and industrialised wine production in favour of planting flowers and tress around their vines so they can start a self sustaining local eco system. However, with the growing popularity of natural and biodynamic wine, Can you ever foresee this expanding so much that natural wine will start to be produced at such an industrial scale? Is it even possible to produce natural wine to such a scale?

ISABELLE: Yes definitely. I think it’s all about the resources that you put in place and about the size of the land. So if you have a piece of land that can accommodate production of this size. Mein Klang winery is a great example of this. I’m not sure of their actual size but they have a farm where they not only harvest grape but they farm cattle, produce their own cereal in which they produce their own beer with and have a little school in the village for the children there to educate them and help them interact with the community. It is possible but you have to be very committed and if you are prepared to acquire the resources to be able to farm properly.

To be honest, I think there are too many grapes planted in the world and in areas where vines wouldn’t necessarily survive without a constant supply of water to them, so I think we need to cut back and be sensible about what and how much we are producing. This stretches to all aspects of what we eat and drink, like milk and meat. We are over consuming and need to cut back and only consume when it is sustainable.

Sorry, I didn’t mean to rant!

WINED UP: No it’s fine! So, just to change the subject… Last time we spoke we chatted about Action Bronson and you mentioned that the next day you were heading back to the Vice kitchen to film another episode with Action Bronson for ‘The Untitled Action Bronson Show’. How was it? Was it just as chaotic as before?

ISABELLE: It was complete craziness. When I go there I’m the only one who’s not stoned and almost feel quite boring but it’s good fun. It’s a great show and he is a great guy. He has a good pallet and actually thinks about what he does even though it might look very chaotic. I love being on the show because it’s let loose and entertaining, and people get a lot out of it. Somebody said to me “You should never go on that show, it’s too crazy” but actually people love it. 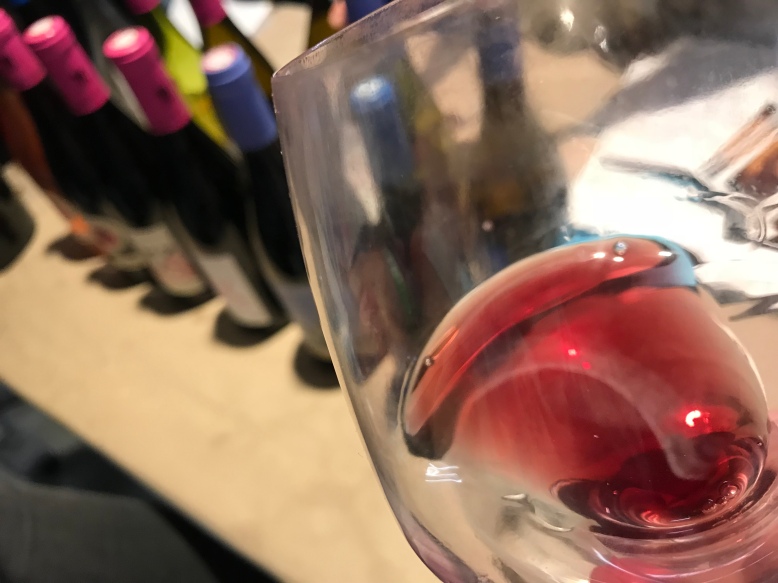 ISABELLE: Yeah, it’s good for the natural wine movement! So what if he is swigging a magnum while smoking a joint, because that will resonate with some people.

WINED UP: Just one last question, as France’s only female master of wine you will have worked your way through what traditionally has been a male dominated industry, but what is the industry like for women at the moment?

ISABELLE: It’s getting better. It tends to still be male dominated in who makes the wine but it’s changing. I’m not sure if it is a 50-50 split but it is getting better.

I’ve never had a problem from being a woman except once eight years ago. I sent a bottle back because it was corked and was told “how would you know, you’re just a woman” but that’s only it really.

WINED UP: Cool! Well thanks for sitting down with us again. We’ll see you next year in whichever city we end up in!

Once again, we had a blast. It’s great to see the natural wine movement expanding and moving into different cities. To be honest, all joking aside I think that the fact that there are establishments in cities like Sheffield just shows the reach of it and how wine culture in general is becoming more accessible. During the wine fair we ran into a guy called Vincenzo who operates his own natural wine Distribution Company in Sheffield called ‘Naturally Wines’. 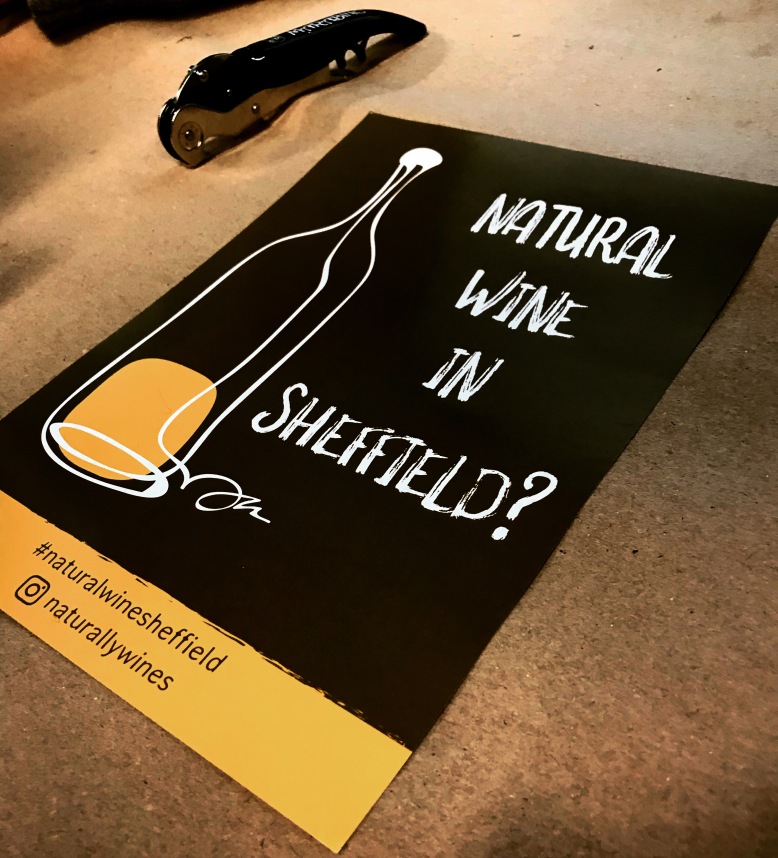 We are such fans of RAW wine and already in the year that we have had affiliation with it we have gained new connections, long lost connections (read about that here), educated ourselves in different styles of natural and biodynamic wine and with a little further push from ourselves maybe we will be able to fulfil our dreams…. of… appearing on the ‘Untitled Action Bronson Show’.