Let me start by saying: nobody is born with the innate ability to identify aromas in wine. That would be bizarre. It’s probably the part of the tasting ritual that flummoxes people most when they’re starting out.

For beginners, wine just smells of… well, wine. But I promise you; people who claim to smell notes of melon, black pepper, apple and freshly cut grass in their glass of Sauvignon Blanc aren’t bullshitting.

It’s extremely rewarding when you finally start to be able to pinpoint specific aromas, and there’s a way of boosting your ability to do this. What you can smell is largely subjective, because it’s based upon what you’ve experienced.

So, what are we actually talking about when picking out wine aromas? Firstly, it’s really important to know that nothing is added to the grapes to enhance the smell of the wine. If you can detect strawberry in your Rioja, which you probably can, there are no actual strawberries used in the winemaking process.

We’ll go into the science in more depth another time but, for starters, you just need to know that aromas are created at three different stages of winemaking: growth (when the grape is on the vine), fermentation (when the grapes have been harvested and the alcohol is being produced) and ageing (in the bottle).

Let’s look at Chardonnay briefly, known as the ‘slut’ of the grape world. Chardonnay will pretty much grow anywhere. The grape itself doesn’t have a particularly distinguishable taste or smell, which makes it perfect for expressing different winemaking techniques.

You can tell when Chardonnay’s been fermented in oak barrels or with oak chips for instance – it takes on warm aromas of toast, vanilla and coconut. Whereas, in the cooler climate of Chablis (France), the wine is rarely oaked meaning that it smells much crisper, with notes of green apple and citrus.

The fact that there can be such huge differences in the same grape variety is why so much attention is given to smelling a wine’s ‘bouquet’. It gives you a hint of where it comes from, how it’s been made and, most importantly, what it will taste like.

So I’ll get to the point. Who’s been in a room full of people who can smell black cherries, blackberries and, “Ooh, just a hint of aged leather” in their red wine and wondered what the hell is going on? I’ve certainly been there and it can be extremely frustrating.

But all it takes is one eureka moment, one lightning bolt of “Shit! I can actually smell honey!” and you’ll start to gain a bit of faith that the people you’re spending time with aren’t just total douchebags.

The trick is not to feel restricted by what you’re hearing around you. Be completely honest about what you can smell and enjoy the fact that, sometimes, you might be the only one in the room picking up that particular aroma.

Old hats get used to using a specific vocabulary to describe what they smell – novices can actually sometimes be more accurate because they’re not restricted by what they know to be correct/acceptable.

One sure fire way of enhancing your sense of smell when it comes to wine, is by building up your memory of those smells in everyday life. It’s pretty difficult to detect lychee in a glass of Gewurztraminer if you don’t know what an actual lychee smells like.

A great activity to indulge in if you’ve got a couple of free hours on a Sunday, and friends that won’t judge you too heavily, is to go to a market or have people round after a quick trip to the supermarket. Just take some time to smell or taste a variety of fruits, vegetables, spices, herbs, flowers, etc. Really take in the aromas you’re experiencing and embrace the total wankery of it all.

Do this alongside an aroma wheel (below) to really identify vocab that will be useful when you’re next tasting. You should start to feel far more confident when you’re describing what you smell.

And please, don’t ever hold back if you can smell tar, nail varnish remover or wet dog. Just because they sound a bit gross and ridiculous, doesn’t mean that the aromas aren’t there. I can also pretty much guarantee that someone else in the group will have secretly been having exactly the same thought… 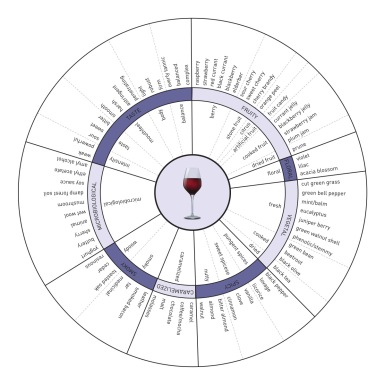 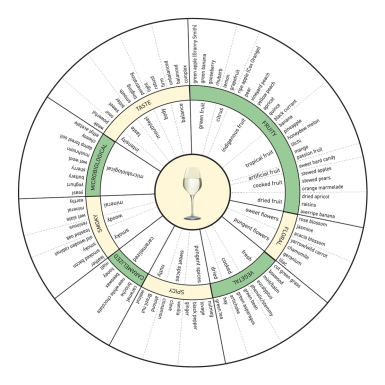