By the sounds of things, I didn’t blow it with the first article. Which is great because reading my own work is seconded only to hearing myself talk.

This month’s Tuesday Night Tasting was themed ‘Barbecue Favourites’ and was hosted by Sainte-Famille Wines (one of the oldest vineyards in Nova Scotia and within walking distance for yours truly). When I first heard about this theme I was really intrigued. The first thing that came to mind was big reds meant to be matched with big steaks. However, further thinking led me to imagine other possibilities involving whites or the potential rosé.

As it turns out, all the wineries had the same idea and went with that initial thought of bringing out our reds. I have no issues with it because they offered a good range in boldness. I’d be lying if I said I didn’t want some diversity with them, but you tend to keep those thoughts to yourself when it’s a catered event with free booze… or just voice them afterwards in a blog post.

Here’s where writing about TNT’s becomes an issue. Much like wine club, each TNT starts out with the best intentions of it being educational. The problem is that the glass keeps getting refilled and you can quickly lose focus of the initial task.

However, there were two distinct wines that I recall standing out.

The first was Luckett Vineyards 2017 Triumph (we like to spell it differently) because I pour that almost everyday and, due to the production team and relevant crew being busy, I did the speech for it (where I referred to it as the Honda Civic wine because of its versatility). Using the Triomphe D’Alsace grape, this is one of my favourite wines from LV as it’s very approachable and I’ve found it’s great for a wide-variety of occasions. In fact, I’m enjoying a glass of it now as I edit this article (using the glass I got from RAW wine NY).

The other was part of the finale by our lovely hosts. It was nicknamed “Big Boy Baco” and rounded off our evening with a bolder (by NS standards) style baco noir that hadn’t even hit a bottle yet (see far right of picture below). As someone who enjoys bigger reds, I can assure you that it lived up to its namesake.

For a province that’s not known for red wine, the producers proved that stigma is quickly becoming something of the past. We’re not quite at a Malbec level, but it’s enough to keep me satisfied at least. I’m going to shamelessly promote our industry for a moment and say that, if you make your way out here, we definitely have a wine to suit your tastes. We’re known as a white wine region, but that hasn’t stopped us from successfully producing some fantastic reds.

I am very proud to say that I have now been offered to take over as the show-runner for TNT’s, so I will now be taking more notes and having less shots. The latter will be very beneficial because I’ll need to form coherent sentences for the entire evening. You needn’t worry about me losing some joy in that venture as I can easily get caught up at the wicked after-parties we have. 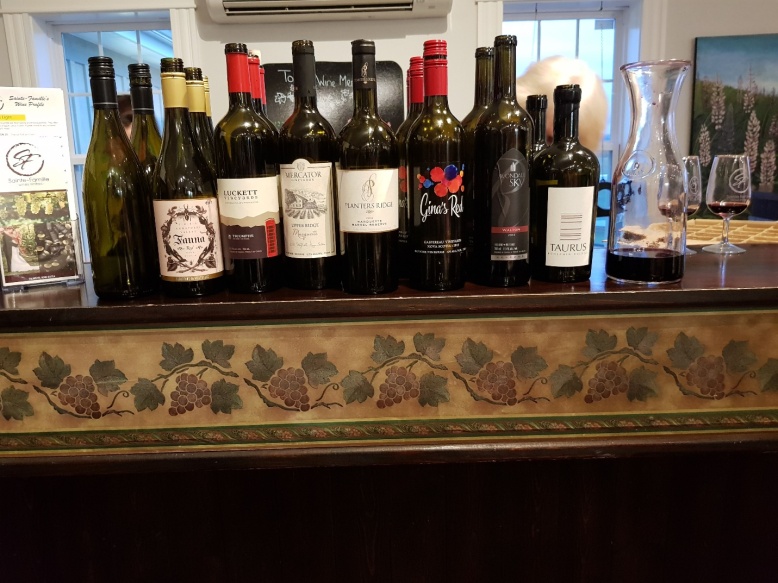 The range that we tasted at the latest TNT

I want to shift gears for a second and talk about a heavy subject for our industry.

Every year we hear about wine regions getting hit by a late frost and brush it off thinking “oh, thank god it wasn’t us”. Unfortunately, it was our year to be that region. During the first week of June, we were hit by a frost that hadn’t appeared so late and so strong since something crazy like 100 years ago. At this point, we are unsure of the damage and won’t know the extent of it for a few weeks. All we’re certain of is that it hit and that it affected pretty much the whole province (and any plants that were starting to bud).

We heard the warnings, but there wasn’t a whole lot we could do. Mother Nature is a powerful force and we pretty much just had to take it. The limited options we had were things like lighting large fires on the ends of the rows and/or having helicopters fly overhead in an attempt to keep the air moving. There are other wine regions that actually purchase large wind machines that…. well…. create wind. We weren’t expecting something of this calibre, so it was difficult to implement those options by the time we realised what had happened.

The interesting part is that it’ll be one hell of a page in our history books. Where we have a combination of vinifera and hybrids, I’m rather intrigued by what will happen to specific varietals and see how different ones work through it. An event like this will affect us for a few years and we are exploring options to regain some of the lost yields while we ride out the wait for our domestic vines to rise again.

I’ll keep you all posted.