This month’s Tuesday Night Tasting surrounded the theme of “Vinifera” and was hosted by the fine folks at Planter’s Ridge. As host/showrunner, I felt the need to up the presentation game. This involved deriving the word “Plane” from Planter’s Ridge, obtaining a Pilot costume, and introducing each vineyard, as though we were on an airline, with generic announcements. If I’m known for anything, it’ll be for the dedication to TERRIBLE humour (you should see my sprinkler updates) that results in sporting hot costumes in the middle of August.

To briefly recap what “vinifera” are, they are the old school/O.G. grapes. The ones that have been around for centuries and the ones people recognize most. Hybrids are a result of cross-pollinating two (or more) of those Vinifera to produce a more hardy, resilient varietal.

This is one of the coolest ones to see each year because, as a region that initially relied on Hybrids, we are seeing more varietals with each round. This year’s brought together a lineup of Rieslings, Ortegas, a Chardonnay, a “Field Estate”, and a Cabernet Franc (lovely surprise to see a red!). Most of the other TNT’s see a strong force of hybrid varietals, so this one is a much-welcomed refresh as it shines some light on the evidence of an ever-growing/developing region. 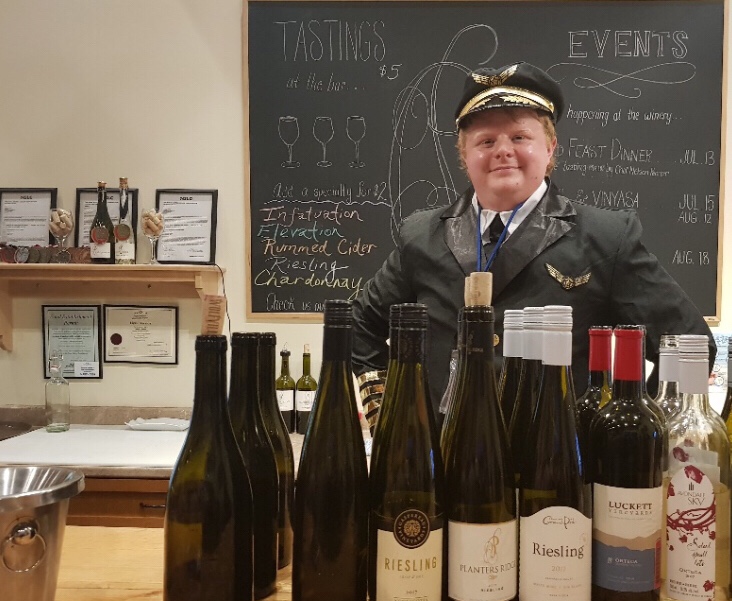 I had the pleasure of running into some of the folks behind the Viniserve team (twice) recently. The encounter prompted me to want to talk about it a bit because they are a company who found a need and managed to create something fascinating to satisfy it.

One of the biggest burdens a winery endures is balancing the overhead expense with what infrastructure is necessary. A major point of debate is what their bottling needs are and how will they meet those goals. A bottling line is not a cheap investment and your demands now may be far less than what they will be in a few years.

The folks at Viniserve have a fleet of mobile bottling lines that streamline the entire process. They back up the snazzy 18-wheeler/freight truck trailer and plug into your tanks. The only requirement from the vineyard side is to have a team in place to load empty bottles and unload the full ones. The rig takes care of washing/rinsing, filling, corking, capping, and labelling the bottles (they also have another line that does disgorging).

James had written about his experience on our own/smaller system. Old faithful was how we used to get it done prior to making use of this truck. We will still use it from time-to-time for our smaller batch bottling, but it’s mostly a thing of the past. That setup (going by other’s numbers) could average out to about 3000 bottles in a 5-hour window. The Viniserve line (given we’ve got an all-star team) had us pushing over 3000 bottles an hour. We went from using something that would take an entire summer to finish bottling, to something that could get it done in a (albeit very long and tiresome) week.

Where this is all going is that I am utterly fascinated by the innovation and entrepreneurialism the Canadian liquor industry has inspired. There are other companies doing this all well (though Viniserve has been our go-to in Nova Scotia) and it’s just bonkers to think that they all managed to fit an entire bottling facility into a trailer. Plug in, man the line, unhook, and then drive off to the next one. It’s an awesome thing to have as it gives producers time to build a brand/reputation before making that huge capital investment in a permanent, onsite bottling line (or just keep going without worrying about that expense).

An Upgrape (or just a cheesy title)

As the summer flies by, we get closer and closer to that wonderful time of year known as harvest. I neglected to get some insight on where our vines were at, but I do know we’re nearing the time for the grapes to be plucked from their homes and turned into next year’s wine. The closest I have to any sort of update is that a) the West coast is gearing up for harvesting their lot for sparkling wines and b) this view is just stunning with the vines nearing the end of their seasonal cycle.